The 'Batgirl' movie has been cancelled!

The film which had a $75 million [28 million OMR] budget that grew to $90 million [34.5 million OMR] due to Covid-19 related issues, finished shooting months ago and was already building awareness among fans. Despite this Warner Bros. decided to shelve 'Batgirl' along with the 'Scoob!' sequel.

“Batgirl” was seen neither big enough to feel worthy of a major theatre release, nor small enough to be released on HBO for streaming.

But choosing to scrap the movie makes no sense, right?

Leslie Grace who was supposed to star as 'Batgirl' shared a message to her fans:

I feel blessed to have worked among absolute greats and forged relationships for a lifetime in the process! To every Batgirl fan - THANK YOU for the love and belief, allowing me to take on the cape and become, as Babs said best, “my own damn hero!” #Batgirl for life! 🦇 pic.twitter.com/4D9ZM87Ytu

'Batgirl' directors also released a statement on the film not being released at all:

“We are saddened and shocked by the news”. 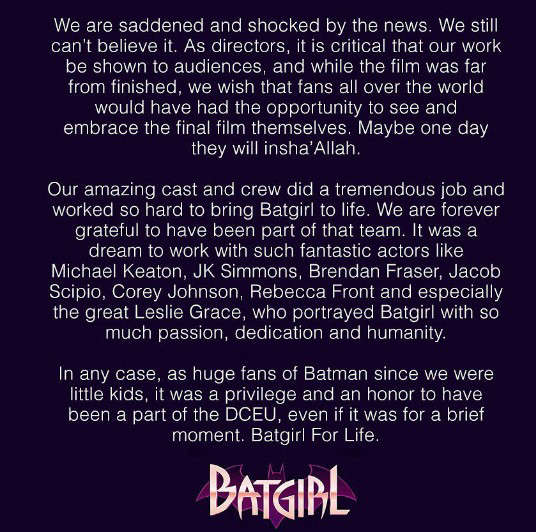 Maybe one day we will get to see it?